KIT-KATS: The American classification of kit-kats as candy (sweets) rather than cookies (biscuits) will never stop seeming baffling (fucked up).

While actual horror struck Lower Manhattan, the rest of the island mostly shut it out of their minds while indulging in horror of the plastic tat, candy gorging kind.

With one eye on the breaking news, I took the four-year-old out. She got to experience all the joy of Halloween – namely, being slammed against gate railings by ten-year-olds who in a sugar frenzy will quite willingly destroy any pre-schoolers in their wake. There was a perhaps important lesson for the four-year-old as she watched older child after older child step in front of her to get what they thought was their rightful candy – in America you are rewarded if you push aside the weak and the vulnerable in order to get what you want.  There was a less profound, but equally important lesson for me, that shouting at ten-year-olds is not the best of looks.

The costumes were disappointing this year. Not a single Paul Manafort out there. Although, in fairness, now that I think about it, some of the more mature Upper East Side fathers in their expensively tailored suits could have been dressed as Manafort; it  can be hard to tell. I mean several times I thought about congratulating one of the Dads on their excellent Jared Kushner outfit, but then realized that was just their own aesthetic.

They were a few teens in Trump masks. His face does have the benefit of lending itself to Halloween better than any President since Nixon.

The only costume I saw with a bit of a wit about it was a woman dressed as the picture of Dorian Gray.

The children dressed as Harry Potter characters, however, are the worst, even the political campaigners hiding behind a witch’s hat – seriously, no child wants a Keith Powers for City County leaflet dropped in their Halloween bowl – are not as dispiriting as the sight of child after child choosing a school uniform as their Halloween costume. There should be something a little taboo breaking and rebellious about the choice of costume. This is, after all, a night when you can play around with identity and break away from the more conservative restraints of our society. Being dull and conforming is part of the design spec for a school uniform.
“What are you going to wear for the school Halloween parade?”
“I’m going to wear a school uniform.”
“But you can be anything. The only limit is your imagination. Is it, at least, an interesting take on a school uniform? Have you ninjaed or zombied it up?”
“No, just a normal school uniform. Except …”
“Yes.”
“I’m going to carry a twig with me as well.”
“Okay.”
“That’s how you know it’s magical – cos I’ve got a twig. So I’m not just wearing a school uniform – that’d be ridiculous – I’m wearing a school uniform while holding a twig. What are you going to dress as?”
“I thought I’d go as adult Harry Potter, so, you know, just office casual … but with a twig.”

A potentially not so dark night for America

You could tell that today’s news was big because the picture of the Presidential Seal that CNN had as a backdrop for their Manafort coverage was cast in a macabre blood red.

Manafort and Gates (can we all, at the very least, agree that this crisis should be dubbed Gatesgate?) are indicted on conspiracy charges, while the hitherto obscure Papadopoulos has entered a guilty plea. It is one of the curious and depressing facets of American paranoia that when finally presented with a bona fide, legitimate conspiracy, as Mueller would appear to be in the beginning of exposing, it will be dismissed as fake while some far-fetched theory will instead be readily believed.

At least there should be some interesting Halloween outfits tomorrow inspired by all this. And, just to be clear, any child dressed as Paul Manafort gets all the candy.

“Let your Conversation be without Malice or Envy, for ’tis a Sign of a Tractable and Commendable Nature: And in all Causes of Passion admit Reason to Govern.”

Rule 58 of a set of 110 rules for civility and decent behavior written by French Jesuits and which a sixteen-year-old George Washington copied by hand.

“I heard poorly rated @Morning_Joe speaks badly of me (don’t watch anymore). Then how come low I.Q. Crazy Mika, along with Psycho Joe, came to Mar-a-Lago 3 nights in a row around New Year’s Eve, and insisted on joining me. She was bleeding badly from a face-lift. I said no!”

First you notice, or, at least, I notice, the dogs. Twitchy, yappy, kitschy dogs in shades and cowboy hats making their way down Fifth Avenue. Most are in prams, but today’s all about one-upmanship so some poor mutts suffer even worst fates. Some terriers in a plastic, remote controlled pink Cadillac buzz past me, a small army of laughing children chasing after them. “Don’t pet them, they’re not in the mood,” shouts the owner as he simultaneously tries to steer a path through the crowd for the dogs and weave himself through the melee he’s causing. Unkindly, I think, with his yellow polyester shirt and what looks suspiciously like a toupee, that there’s something of a failed Reno cabaret act to him. “We’re going to be turning left everyone, LEFT!” He sounds exasperated, but no one forced him do this. This was all his choice

Outside St Patrick’s Cathedral are the doomsayers. A sign reads: “BE WISE AND REPENT. THE TIME IS FULFILLED. THE END IS AT HAND.” A man hands me a leaflet entitled “Bill Clinton, The Pope, And I,” it confidently informs me that the Catholic Church “is Satan’s Church.” I watch and photograph an argument between one of the protesters and one of the people out to amble along the parade. I’m one of many filming it, and it feels a little heightened for our benefit. But then everything about it is. Some fun hats and bonnets, but also all the city’s frustrated showmen come creeping out to. 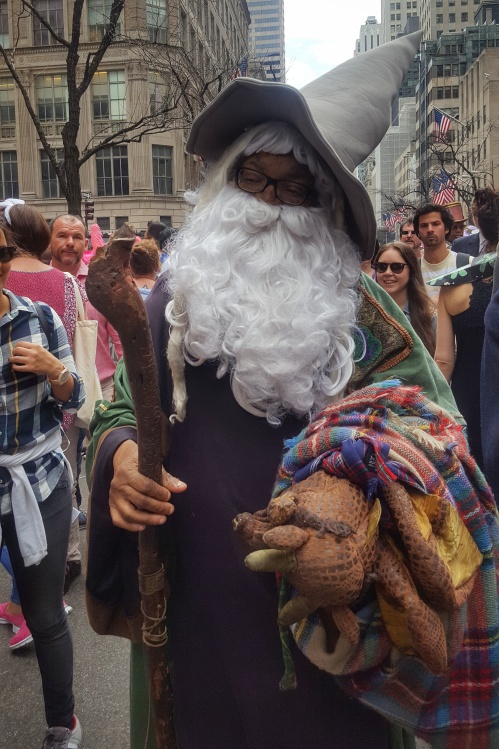 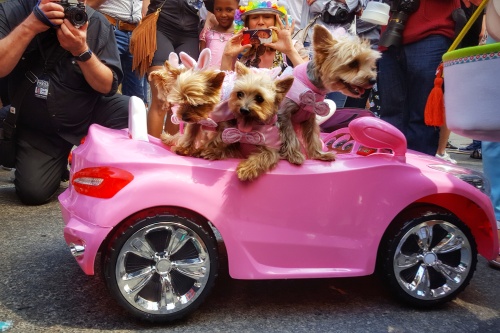 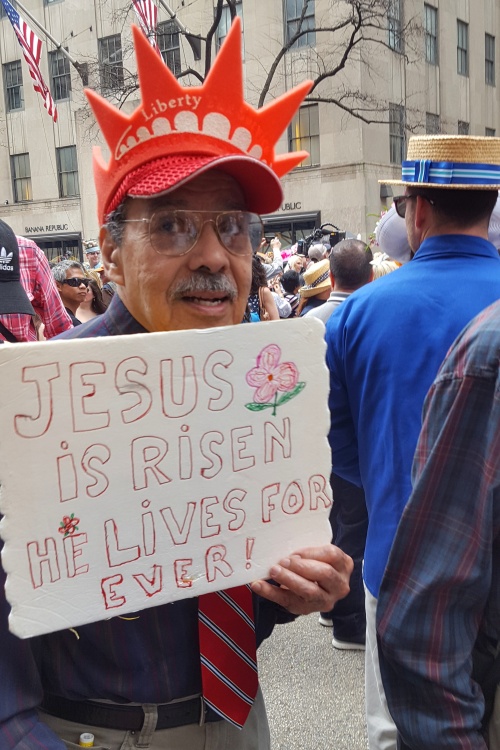